On friday October 30th, thanks to Peter and Fintan of the Film Photography Workshops, I got to be at “an evening with Joe Cornish“.
Joe is a long standing landscape photographer. He’s tall, remarkably slight (for a man who lugs 20kgs of equipment up and down moutnains) and soft but clearly spoken. He is completly enamoured of the nature of the world he’s seen and it was hard not to get caught up with him in the amazing views to be had at 20,000 feet. Seeing his work did malke me glad I hadn’t booked in to the workshop in wicklow the next day. I’d have to be dragged up those hills!
Here are some sound bites from the evening:
END_OF_DOCUMENT_TOKEN_TO_BE_REPLACED

It’s tuesday and whilst my heart chokes on the INCRDeibly salty pub grub I reflect on my latest treasure.

Yesterdays trip to belfast ended quite fruitfully, as I’ve been after this little item since late last year. It was in a tiny antique shop at the back of an older commercial district. Actually the shop might not be that small simply the avalache of goods which pours at near glacial speed down the walls just makes it seem small. Every crack and crevice and space bulges with historical goods.
The piles had re located slightly since I’d last been and it seems someone had broken into his shop. It was the first time the owner had opened his store since the break-in and he was carefully restoring one of the pieces destroyed. Thankfully the theives didn’t know their antiques from their asses and the most vavluable stuff hadn’t even been touched.

I was worried that what I was after was gone or buried. It took a long visual search to find. Since it was expensive enough and I wanted to bargin down I couldn’t just ask do you still have ..? That’s a sure fire way to loose any barganing power.
Not that either party minded how long it took as the more time spent the more and more things the owner could show off and i’ll certainly go back there again. Not in a hurry though. This is a lesson in history. This is not to be rushed.
The owner was a retired gentleman with an accent I could not place and a glint in his eye everytime he picked up a sword to tell it’s tale. “this is from the battle of the boyne” says he, “you know the battle. Yes? NO! You only THINK you know!” “they should not have won. No. Already they had lost. That should be end of the story. BUt .. ” waggin his fingers for emphasis and looking over the brim of his glasses straight at me as a lecturer to student “they had been partying. Too many celebrations. Too much of the taking and the drinking and the women. When they fought it was with their trousers around their ankles I think. And so. They lost.” he looks at me triumphant and expectatant. Waiting perhaps for my amazment over the revelation. “ah. You don’t believe me.. Look here. I can Prove it to you” and so every item lead to every other item, bouncing back and forth through history. From 20 years to 20,000 years from continent to continent, and every war ever held. It was great.

Until, finally, the day was getting late and the prize had been found. A world war I ensignette english army pocket camera. Made in london and designed in 1907. A beautifull piece of equiment. Nicknamed a vest camera because it was small enough to fit into a vest pocket. It’s a pure metal case. Brass I think. It was a good weight to it for something so compact. When folded up it’s roughly the size of a ten pack of cigarettes. About five inches long and one inch deep. When unfolded (by pushing the front up from both left and right side simultaneously) the lens and bellows (completely intact in this. yay) bring the camera to a depth of roughly five inches.
It’s so simple yet quite clever. The billows comes out on metal runners which fold into the case when not in use. The options on the f-stops are so basic that turning the dial from f16 or f11 merely swings around a smaller or larger hole! I love these solutions to problems. Simple. Effective.
It also means these lil blighters last for years and can still function. It is a shame that it’s a prepriatry film make but i’ve seen guys on the internet getting photos out of older cameras using chopped up 36mil so i’m sure something can be done 🙂

you can can see more or buy his book on the website www.janvonholleben.com

Keeping up the fine tradition of obvious advertising 😉

you shouldn’t fold a poloroid.. but no one said anything about the camera. later last year as my interest in old cameras grew I found a strange plastic block camera in an antique store. I asked the staff but no one could figure out how to work it. By shear luck a man was visiting the owner and sitting at the end of the counter. He looked like something from a movie – black coat, jewish cap with the ringed hair framing his face and an accent I’d only ever heard in films. “Ahhhh!” says he “I know this camera well. I saw them in new york when I was a kid” he then squeezed and pulled and ‘fwip’ the camera was revealed. I was delighted! of all the old cameras he had, this one was intriguing, this one I could get my hands on and work with.
It took a bit of gentle persuading and research to get the camera to take modern film but it worked. The photos are very washed out, even with the dial set to high contrast and the photos end up with a strange no-face effect but I’m sure I’ll find a way round all this. 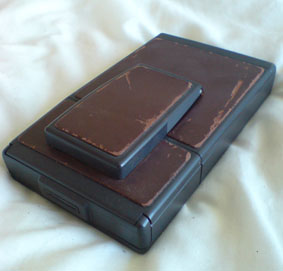 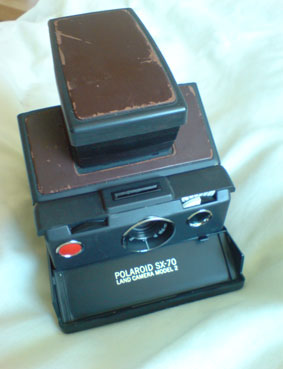 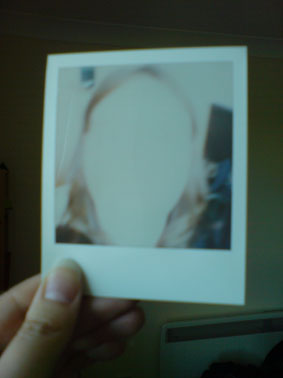 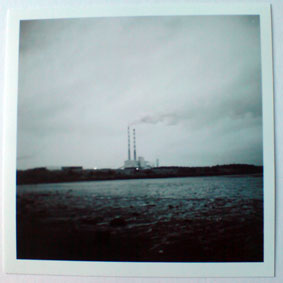 the greater the distance the less the parallax problem 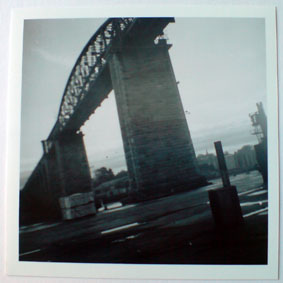 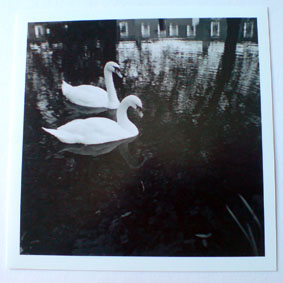 some local swans. beautiful to look at but you don’t want to mess with these guys!

how I met my first voightlander

it all began about a year ago.  I was hankering after a holga after flicking through ‘life through a plastic lens’ a photo book of  holga shots.  The ones I’d found around town were more expensive than I was willing to pay for a plastic camera.

I was repeating this to my mates dad knowing he likes photography too. He looked thoughful for a moment and disappeared up stairs. When he came back he handed me a leather case. “something like this?”

I could bearly speak.. I was in love. A tall standing metal camera. two lens mounted above each other and geared togeher in such an elegant solution to the focusing problem. the weight of it. the look of it. the only thing amiss was the mirror.  when looking down from above to see the mirror was quite rusted and need a while to figure out.

I was so intrigued I nearly didn’t hear the lineage. He had gotten it from a lady, long since passed, who had gotten it from her brother.  “Nice present” thought I ince it would have been quite a piece of kit in it’s day. But that wasn’t the end of it. Seems the brother had been a major in the british army and had gotten it from a german on D-Day.  I recoiled a bit at that point. It was ‘spoils of war’ then and I wasn’t sure how I felt about that. I know it was a different time but still..

I was still figuring my feelings when he said “we’re sending it to a museum. unless you want it? if it’s what your looking for?”. A MUSEUM?! to sit in a glass case doing nothing?! Never to be used again?! NO WAY. A camera deserves to fulfill it’s function for as long as it can. what I was looking for? I just turned to him and said “no. Its MUCH better!”

so he’s happy the camera is being used and I’m happy because I love to use it. you have to spend time with it. set it up. think it out. and when the photos come back after a week of impatient waiting they are a perfect square.

thats were it began. my obession with antique cameras. its certainly not were it ends 🙂